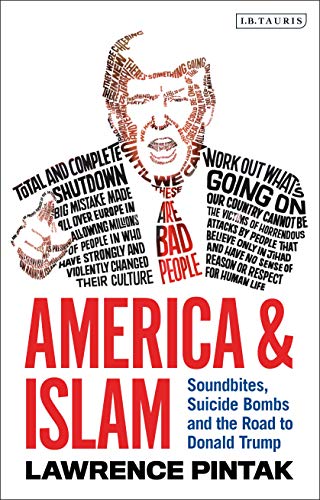 Donald Trump’s presidency shocked the world. His attitudes toward Muslims became a key point of contention on the campaign trail, and proved to be a harbinger of his broader war of divisiveness and discord. Here, acclaimed journalist Lawrence Pintak scrutinizes America’s relationship with Islam since its foundation. Casting Donald Trump as a symptom of centuries of misunderstanding of Muslims and demonization of the Islamic world, as well as a cause of future tensions, Pintak shows how and why America’s relationship with the world’s largest religion has been so fractious, damaging and self-defeating.

Featuring unique interviews with victims and perpetrators of Trump’s policies, as well as analysis of the media’s role in inflaming debate, America & Islam seeks to provide a complete guide to the twin challenges of terrorism and the polarizing rhetoric that fuels it, and sketches out a future based on co-operation and the reassertion of democratic values.

“Insightful, well-written, challenging. Pintak is both a globe-trotting journalist and a distinguished scholar. He's not afraid to challenge assumptions, group-think, and the powerful.”
Dan Rather, former anchor, The CBS Evening News
"For many years, Pintak has used his unique blend of scholarly exactitude, deep area knowledge and the accessibility and clarity of a seasoned foreign correspondent to illuminate the bewildering array of events that cascade from the broader Middle East."
Ryan Crocker, former U.S. ambassador to Iraq, Afghanistan, Syria, Pakistan, Lebanon and Kuwait
“In this thoughtful and well researched book, Pintak takes a close look at why a deep misunderstanding of Islam still persists in America. The result is an honest, fair, clear and timely appraisal in which Pintak deftly avoids the temptation to simplify or patronize the complex dynamics at play in Islam today.”
Clarissa Ward, CNN chief international correspondent
“In this well-timed intervention, Pintak draws on decades of experience to deliver a sharply observed, critical tour of America's problematic political debate about Islam. Expertly tracing the passage of extreme views of Islam from the margins to Trump's White House, America & Islam offers an important guide for the media, politicians and the public.”
Marc Lynch, The George Washington University. Author, The New Arab Wars
Return to books